Do you Need 4K Video?

Apple’s latest version of the I-Phone, the I-Phone 6s, is capable of shooting 4k video. What is 4K video? And do you need it for your next Arizona video production?? 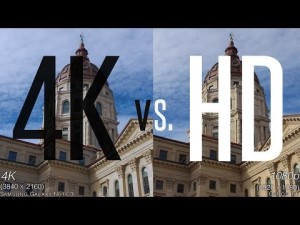 So, as you can probably guess, 4k video offers roughly four times the pixels of HD video, making it the next big jump in video quality. You probably have seen some new TV’s at Best Buy and Costco offering 4k ready TV’s. Here’s the problem: While technology today offers 4K, there are very few if any programs or shows being broadcast in 4k. Additionally, few people have the ability to watch 4k at home or on their computer, so the ability to shoot or broadcast 4K is still mostly pointless.

However, in video production circles, 4K today is a valuable tool. That’s because you can shoot a project in 4k and get a much higher quality resolution and color. In the post production process, you can then downscale your 4K project to 1080 HD, while retaining some elements of your original 4K video. Here’s one of our video projects, where the interviews you see were originally shot in 4K and down-scaled to 1080 HD:

While it may take a trained eye to see the subtle differences, 4k video files do offer image improvements, even when down-scaled. Do you need it? For now, in most cases, 1080 HD video should do just fine for most clients. But we are 4k ready for the next video technology transition.