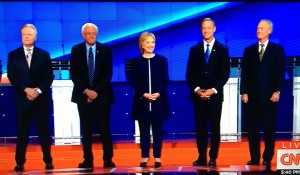 Former first lady, Senator, and Secretary of State. Love or hate her, her opener resonated and received applause. Handled questions on flip flopping well. Said it’s “time for country to stand up against NRA”. Effectively called out Sanders on soft positions on guns. Held her ground well while under attack by Sanders and Chafee. On the email controversy, she called it a “highly partisan issue”. Her effectiveness in part due to finishing strong on every position and her ability to vary her pacing and voice tone to make her points. She sounded very Presidential.

Vermont Senator. The angry Lewis Black like approach. Aggressive and in your face. Also received applause during opening remarks. CNN question-Can a democratic socialist win? Sanders did not side step. A few stumbles in messaging. Hard to stay angry and loud over extended time. Hammered on “the top one percent” repeatedly.”War should be last resort”. He defended Clinton, saying, “Forget the emails. I’m sick of it. Lets talk about the real issues facing America”.

Strong performance but not quite as strong as Clinton.

Former Virginia Senator. Former marine. Confident delivery, good body animation and strong opening remarks. Showed knowledge of intelligence on Benghazi but did not go after Clinton. He complained about his lack of debate time and I don’t blame him. Part of his debate problem-not formulating thoughts fast enough for TV.

Former Rhode Island Governor. The ” no scandal” candidate. Had nervous eyes.  Unusual and a bit awkward delivery. A self described “block of granite on the issues”. Went on attack by questioning Clinton’s Iraq war vote but struggled to effectively message his points. Not a confident debater.