2015 Republican Presidential Debate: How Did They Perform? 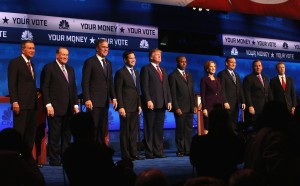 Rubio woke up to a scathing newspaper editorial asking him to step down from his senate seat but opened strong.  He called the editorial “media bias” and received loud applause when he said “there is double standard between the mainstream and conservative media”. He also did well speaking to his personal finance problems and he did a nice job connecting to real people. “Hillary Clinton has her super pac, the mainstream media. She admitted she had lied (Benghazi) but the media said she had the greatest week ever”. “I’m against anything that’s bad for my mother”. Great sound bite. Came across as sincere, poised, and confident.

Got loudest applause during introductions.

“I was told I don’t smile enough”. Opener not as shrill as first debate and delivery toned down. Wants to reduce 73-thousand page tax code to three pages. Was asked about her firing and stock market woes while CEO at HP and why America should hire her? Didn’t dodge the question, admitted her failure, “I had to make tough calls in tough times”. Handled question well. She showed more empathy than previously and smoothed out the jagged edges. Spoke of “cronie capitalism” and “the government creating problems which they need to fix which starts socialism”.  Nice messaging. One of most substantive candidates at this debate. Attacked Hillary in her closer and said “I will beat her”.

“I’m passionate about the constitution”. Rolled out his flat tax plan. “The questions rolled out tonight show why the American people don’t trust the media”. Attacked CNBC and received loud applause. His CNBC barbs changed the tone of the entire debate and the candidates backed off their attacks on each other. He stayed on message and spoke in polished sound bites. Average closing though.

Went on the attack of the democratic candidates right off the top. Addressed camera head on as he spoke about how the money will run out for social security. Says his entitlement plan will save a trillion dollars a year. “The American people have been lied to…” Handled question well on GM’s faulty ignition switches. Took on Obama over what Christie said is a lack of support of police and scored points joking about any regulation on fantasy football-“Who cares!” Finished strong. Cheesy closing.

“I am too trusting”, Trump says is his greatest weakness. Trump allowed to be Trump without interruption at the start. Ripped Kasich for his role at Lehman Brothers and banking record.  “His numbers tanked so he (Kasich) got nasty.” Took question on his Atlantic City bankruptcy and buried himself a bit in his Trump-isms. Early onhe  did not seem to connect with the audience or deliver his usual zingers and he struck out when trying to summarize his positions with any real solutions to fix the border or medicare, although he finished stronger than he started.

“I try to play by the rules. Washington does not play by same rules.” Scored points when he held his ground when pressed on his time limit addressing social security. But for the most part, Huckabee’s performance was flat. Compared our government to a blimp and scored points but missed the mark when he said, “why don’t we cure diseases like cancer and diabetes…” I am pretty sure  every candidate wants that. Made friends with Trump when he said “he would make a better President than Hillary any day of the week”.

Took question on how his flat tax plan would work. Says it would  be closer to 15% than 10%  tax bracket.  Soft spoken can be perceived for a lack of passion. He admitted his greatest weakness is not believing he can be President until voters prove him wrong. His performance began as flat as his tax plan. Has an awkward habit of closing his eyes. Did well answering a question on his support of traditional marriage while serving on board of Costco, which offers same sex benefits. A soft, sincere closing resonated.

Focused on the deficit. As always, calm and collected. Took a jab at the right and left for the lack of budget reform. Focused on the same old Washington. I give him credit for offering positions of substance but he did not make the loud splash he needed to. Flat closer.

Took opening question on greatest weakness and didn’t answer the question. Passionate and crisp with his message points early on but faded later. Ripped all the candidates and their platforms. “You need to wake up. You can’t elect someone who can’t do the job”.  He faded late and didn’t recover.

Got into a verbal jab with Rubio over Rubio’s voting record and Rubio got the better of him. Bush seemed off and not confident. Showed a sense of humor about his fantasy football success while addressing fantasy football regulation but didn’t score a touchdown in this debate. This nights worst debate performance.