A Sit-Down Interview with a Professional Hitman 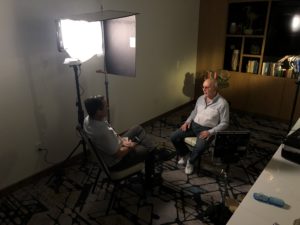 Gravano, the former under-boss of the Gambino Crime Family and the man later responsible for taking down John Gotti.  A man who has admitted to being personally responsible for the murder of 19 people. “Sammy the Bull” is well known on the big stage, and here in Arizona, where he initially landed in the desert under witness protection. I remember him well from the 1990’s when Gravano was busted by police in a drug ring and he was sent back to prison for another 17 years, after already having served five years from 1990 to 1995.

When we sat down, Salvatore (his real name)  told me this was the first TV interview he had done since Diane Sawyer, when he was released from prison the first time in the mid 1990’s. We chatted for a long time and talked about his time in prison, which included six years in solitary confinement, which he described as “very challenging”.  He said he would talk out loud to himself everyday to “not go crazy”. The first thing I had noticed was his change in appearance. I still remember his booking appearance in the 1990’s. He was never a tall guy but was very stocky and muscular. Prison and time has taken a toll, as he now looks considerably older and thinner (he just turned 74 years old).

Gravano says the biggest challenge when he got out of prison was adapting to a digital world. When he was sentenced, the internet was barely a thing and cell phones did not exist, except for the giant ones you see depicted in 1980’s movies. He says he is still trying to figure out  how it all works. As for hobbies, he says he really doesn’t have any and it is too late for him to go back to construction work. So, he says, he plans on spending time with his family and grandchildren. When I asked him where he now lives, he told me “Non-za”, as in “none of your damn business”. And as for the 19 murders, he says “he is not proud of what he has done, but it is what it is”.

Expect to see a lot more of Gravano in the months ahead. He showed me a photo of him with Mark Wahlberg, who he describes as a good friend and there appears to be some movies about his life in the works.

As for my impressions from time spent with “Sammy The Bull”? Seems like a nice friendly guy with whom I carefully chose my words.