One of the great communicators-Joe Garagiola

He’s now 88 years young but the guy is still a great sound bite. I have always loved watching and listening to Joe Garagiola. As a kid who loved baseball, I feel like I grew up with Joe. Before the internet, even before cable TV, there were only a couple of options to watch baseball and Joe was connected to all of them. From the “Game of the Week” broadcasts to the “Home-Run Derby”, you would find his friendly face and unmistakable voice. 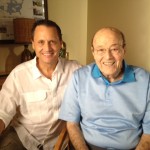 Joe Garagiola played the game professionally but he will tell you he was an average player. It was only when he picked up a microphone after his playing days when he found his true skill. This guy could ad-lib from the get-go. It wasn’t long before broadcast executives put Joe to work. What began as a sports career expanded  into the news world when NBC’s Today Show hired him as host of the popular network morning show. Coincidentally, I recently interviewed Joe for the Today Show regarding his charitable work after baseball and broadcasting, and a special recognition this month by Major League Baseball’s Hall of Fame (for the second time).

Joe has had some recent health scares. He suffered a minor heart attack and a stroke. He now uses a cane to walk. But sit down with this legend, connect a microphone, turn the camera on and prepare to be dazzled. He is still an amazing sound bite and one of the best story-tellers of all time.