While professional video production is my business, there are times when my personal life intersects with my line of work. Such was the case recently when my better half asked me to edit a video for her mom’s 80th birthday. The idea was simple enough-get long distance family and friends to record short birthday video messages on their phones and email us the videos. I would import the clips and edit everyone’s messages into one birthday video. I ended up with about 16 video messages, which I uploaded into Drop Box, and then downloaded into a special folder on my desktop. From there, I imported all the videos into Final Cut X for editing.

For the record, everything went smoothly and the video was well received, but there were also quite a few mistakes made, despite the simplicity of recording video on today’s smartphones. In hindsight, I should have offered these tips to all of those who were good enough to take the time to record and send their video messages:

Hold Your Phone Sideways (not vertically up and down) 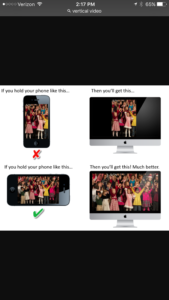 Look At The Camera Lens (not the camera screen)

It is hard to see yourself and not react to it, either positively or negatively. But selfie mode and more importantly, the reflected self-image, is not the camera lens. Stare at your own image and you will get a recording which captures you making eye contact “off camera”. It will look weird and unprofessional. That’s because when you are addressing an audience not physically present, in this case, the birthday girl, the most natural place to look is directly into the camera. On the I-Phone, the camera is the little dot located at the very top of the camera body. That is where you should be looking. Do your best to ignore the reflected image, or you will look “shifty” in the video.

Stand As Close To The Camera As Possible

Smart phone internal microphones are good but not great. On the I-Phone, the mic is located at the bottom of the camera near the charging port. For the audience to be able to clearly hear you, you need to be fairly close to the phone. My best advice, position the phone as close as you can to capture the video image you want. Another words, as an example, if you wanted to capture an image of you next to a sign, get as close as you can to the phone, so it shows you and the sign, but nothing else. Remember, the further you are from the phone, the louder you need to be.