The Viewfinder: The Media’s Way Of Coping With Tragedy

A four year old Albuquerque girl was shot and killed during a recent road rage shooting and it didn’t take long for the local story to become national. In fact, yours truly was assigned the brutal task of talking to the family, to see if they were interested in doing an interview. Over the years, I’ve been part of these horrific stories and I’ve seen them go both ways. Some people have absolutely no interest in talking and others do; some almost seem to find the experience therapeutic. I suppose that is why the media has to ask.

It didn’t take long for me to realize the magnitude of this tragedy. The girl’s father was driving on the freeway with his two children and got into a verbal altercation with another driver. One thing let to another, and the other driver pulled a gun and started firing. One of the bullets struck four year old Lilly in head and she later died at the hospital.

I approached the story the same way I approach similar tragedies-I offer sincere apologies to the family for their loss and tell them I am available should they wish to talk. It’s really hard to predict what they choose to do one way or another.  The process is really nothing more than a very awkward and uncomfortable introduction at the worst time of times. 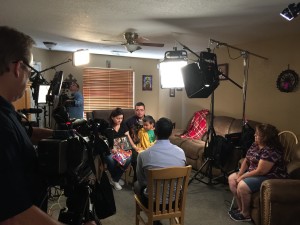 The next day, the family reached out and agreed to do an interview and I knew it was going to be a rough day. Both parents emotionally destroyed to a degree you can only imagine if similar circumstances struck your own family. The interview was powerful, raw, and extremely emotional and myself and the crew had to check ourselves on multiple occasions to keep it together. We later talked at dinner about our thoughts on the story and what each of us did to control our shock and horror. I’m not sure I’ve ever had this exact conversation with another crew before but we all came to the same conclusion- we mentally look at a story through the lens or the viewfinder, and by doing so, it makes the story more about TV and less real. I remember another story where I was required to shoot video of a medical surgery. As I think back, I was fine looking through the viewfinder. Not so much when I lifted my head and grabbed a glance. Fair or not, it’s our safe zone, a way to get the job at hand done without falling to pieces.

If I only I could use the viewfinder to provide the families with some comfort too.