No one really knew what was going to happen. But police, the public and the media definitely knew about the planned Muslim protest at a Phoenix mosque on May 29. The protest was organized as a “freedom rally” and “draw Mohammed” contest on a group Facebook page and was planned in response to a shooting earlier this year at a similar event in Texas, where two Muslim armed suspects from Phoenix were shot and killed by Texas authorities. 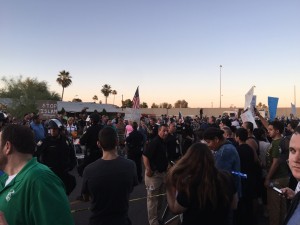 The Phoenix Facebook site went viral and sparked mass interest from the Phoenix community, both positively and negatively, as well as the media and police. The groups organizer said it had to be done to promote and protect our freedom, and he invited the community to support his efforts by protesting Islam in front of the Phoenix mosque where the Texas shooting suspects had attended service. Phoenix Police recognized the potential for violence and planned accordingly, installing video surveillance cameras in advance of the protest and putting together a sizable force on-site to keep the peace.

Needless to say, the media presence was overwhelming, with multiple crews sent from all of the local TV and radio stations. Print journalists, photographers, and online bloggers were also in attendance.  I was there too, hired by one of my network news clients to “keep an eye” on the event. And if that sounds different from covering the story, it was.  A couple hours before the scheduled protest, I received a call from my client, upper management, informing me this story would be a little different. I was under strict orders not to report or produce anything. Just observe. The client told me they did not want us to incite someone from doing something that was not happening on its own accord. We were strictly there to observe, and only respond if something significant happened and only after calling the client first. The client also hired security officers to keep our crew safe. 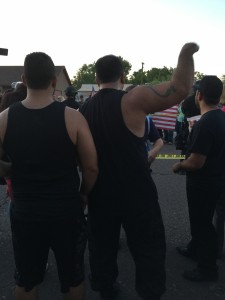 This was something new to me. I have never performed media “work” and NOT reported or even gathered material.

What did I see that night? Early on, more media there than anyone else. Later, more people protesting the anti-Muslim protestors than the other way around. Nothing physical, but I witnessed intense verbal exchanges, one after another, all night long. Each time, a news crew would move-in, capturing the moment, camera in faces, with police in the middle (absolutely stellar job, by the way),  to prevent things from becoming physical.

We did not capture any footage. We didn’t do any interviews. And we never filed any reports.